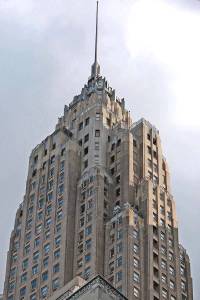 The lovely Art Deco skyscraper at 70 Pine Street has had as rough a few years as its former owner. The Financial District tower was acquired by AIG in 1976, then losses in the economic crisis led AIG to its infamous $183 billion dollar bailout. To recoup some of that money, the company had to sell properties and assets to pay off the debt. Asian investors stormed the building and bought that and 72 Wall Street, another AIG building, for $150 million.